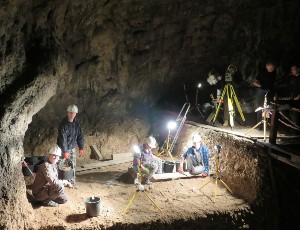 Ciemna cave in Ojców, in the southern part of Kraków-Częstochowa Upland is a key Micoquian site. Prądnik, a stream flowing through the valley, gave the name of characteristic group of asymmetrical knives, as well as the name of Prądnik industry (by S. Krukowski) or “Micoquo-Prondnikiens” assemblages (by W. Chmielewski).

The excavation of this site carried out in the early twentieth century, provided a series of stratified materials. The published profiles explicitly indicated the diverse stratigraphic situations in various parts of the site. The most important part is called Ogrójec. This is collapsed part of the cave, probably even before the advent of Paleolithic man here, now the open terrace. There were two cultural layers recognized by Krukowski within loess - upper with the Prądnik implements and lower,  which according to Krukowski  was  blend of the Prądnik and the older cultural units, including those with handaxes. The stratigraphy in Ogrójec was confirmed by Stanislaw Kowalski in the 60's. A different situation was found by Krukowski at the actual entry to the cave, where he discovered a much longer stratigraphic section with a few scarcely recognizable cultural levels. Although Krukowski has initially outlined the problems of the correlation of those profiles  it still remains the open issue. The attempt to connect both parts of the site was made in the 60's by Kowalski. However, it was restricted to the upper part of the profile. In 2007 the current excavation started in the chamber of the cave which had not been sounded before. New research are meant to synchronize the two essential parts of the site and the sediments inside the chamber. At this stage, we have achieved almost complete cross-section of layers in the cave distinguishing 19 major geological layers and 9 archeological levels. The correlation with profiles at the entrance to the cave, was showed at similar stratigraphic situation. Precise studies have provided new material, that despitely of  weak density, allows us to make a preliminary cultural linkage. Initially, based on the hitherto geological analysis it was assumed that the sequences of Pleistocene layers can be dated from between 8 and 3 isotopic period. The cultural units can be described as follow: Holocene – I cultural level with Neolithic, Early Bronze, Roman Period and Middle Ages settlements; the disturbed layer - II cultural level, a few mixed materials, including Holocene, Upper Palaeolithic and Middle Palaeolithic; Interstadial (3 OIS) - III and IV, micoquian; the lower Plenivistulian (4 OIS) V cultural level, micoquian, early Vistulian: VI cultural level, taubachien like industry, Eemian (5e OIS) – VII cultural level, mousterian with levallois technique and VIII cultural level,  mousterian,  Oder (6 OIS) – IX cultural level, unidentified industry with traces of bifacial technique. For the upper part of the profile with relatively rich micouqian elemnts (III cultural level) and for “main cultural level” from Stanislaw Kowalskis studies it obtained the radiocarbon dates. These are oscillating around 41000 BP, indicating a very late position of Prądnik industry.